The console gaming world, much like cinema, had a very different landscape in 1984. The video game crash the preceding year was attributable, at least in part, to Atari’s E.T. disaster. It was the end of the second generation of home video games, and game manufacturers would not regain the public interest for another 3 years. The further viability of home games based on films – even based on massively popular, Oscar-winning blockbusters such as E.T. and Star Wars – had been temporarily buried.

Arcade games continued to thrive, albeit in smaller numbers. The film-to-arcade adaptation was still in its infancy; Bally Midway had found great success with Tron in 1982, as would Atari with its vector-based Star Wars in 1983 and Indiana Jones and the Temple of Doom in 1985. But it would be even longer before cinematic game adaptations became a genre unto themselves.

So the probability of working the winning formula in reverse – a movie based on a video game – had not yet taken hold. Atari programmer Howard Scott Warshaw, introducing his hastily designed adaptation of E.T. to Steven Spielberg, jokingly called it “the game that would make the movie famous.” Ironic as it may have seemed to Atari (which posted a devastating $536 million loss that year), the final irony of this statement was just around the corner, when the “video game movie” would be made into a box office reality.

The fact that all of these films end up as bland disappointments is continually ignored (much as the original plot lines of the games are) because they come with a built-in fan base before a script is even written. While they have never received much in the way of critical praise (with notable, if obscure, exceptions; Robert De Niro’s frantic turn as Secret Agent 17 in Pedro Almodóvar’s Elevator Action comes to mind), the demographics of the gaming community guarantee a strong opening weekend, regardless of content. And no one anticipated this trend earlier than Holden Hue-Giacomo, executive producer and creator of Videogame: The Movie.

“The economic appeal is obvious,” he told Electronic Games in 1983, “and that’s what the kids like nowadays, right? So there you go.”

VIDEOGAME: THE MOVIE featured a 7-year-old Jonathan Brandis in his first starring role, ten years before he would appear as Lucas on SeaQuest DSV (he was best known at the time as Young Kevin Riley Buchanan on One Life To Live). Jill Bennett (Jacoba Brink in For Your Eyes Only) and Ed Flanders (Dr. Westphall of St. Elsewhere) played his parents; however, the credits only list their character names as “Mom” and “Dad”, and that is indeed the only way they are addressed throughout the film.

The film began shooting in October of 1981, originally to be a family comedy titled Derby Davy, set in a small Ohio town at Christmas, 1965. The story centers on a young boy named David Kegmoore, and his desire to win a neighborhood soapbox derby in order to win the acceptance of his strict father. Subplots include a rivalry between David’s father and their neighbor, and a series of hackneyed running gags involving David’s mother’s bad cooking. 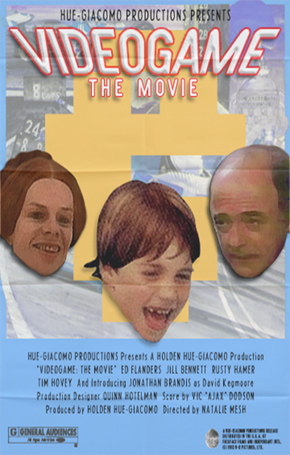 It was completed in late November, and was expected to be a loss; the pacing was abysmal, and with no real story to speak of, the actors were left to mumble through dialogue below even TV-movie standards for syrupy awfulness. There are some surprisingly impressive moments in cinematography–the long tracking shots in particular–but they come across as unsuitably ominous for such a simple family picture (some have speculated them to be the result of poor editing, rather than a deliberate attempt to emulate Stanley Kubrick). Although designed as a light holiday comedy, it was destined for failure from the beginning.

However, Atari was poised to release their home version of Pac-Man for the holiday buying season, and Hue-Giacomo sensed he could salvage the film with a tie-in. The new grand prize for the local soapbox race? The fictional Amarigatachi video game system, represented in the film by an Atari 2600, painted gold. The time period was inexplicably updated to present day, and reshoots were ordered, to director Ethan Mesial’s incessant protests. Mesial asked that his credit be removed, and Hue-Giacomo’s live-in girlfriend Natalie Mesh, a 21-year old waitress from Orinda, California, was instantly named the new director.

It is very obvious that the scenes involving the Amarigatachi system were added after the fact (reaction shots are elongated or even repeated while off-camera characters mention the game in looped dialogue, extras disappear in an additional scene when the game is presented, etc.). But the chaotic continuity errors are only part of the film’s bizarre world in which no cars or clothing were manufactured past 1965, and yet video games are the hottest thing going. (Although at least one of the original film’s anachronisms eventually became a boon: Brandis had worn a Casio C-801 calculator watch throughout the entire filming.)

The new cut of the film was temporarily shelved following the poor test response. Meanwhile, Atari’s Pac-Man port was a huge seller, yet a critical flop. Soon after, industry insiders predicted the end of the video game fad. It wasn’t until July of the following year that Tron became known as the first “video game movie.” So when Videogame: The Movie was finally widely released in June of 1984, it was ignored by the world (Star Trek III, Ghostbusters, Gremlins and The Karate Kid also premiered that month). Holden Hue-Giacomo died at his Hollywood home after taking Quaaludes and falling asleep in a hot tub, and all three of the film’s stars would eventually go on to commit suicide. The memory of the world’s first video game movie was forgotten. 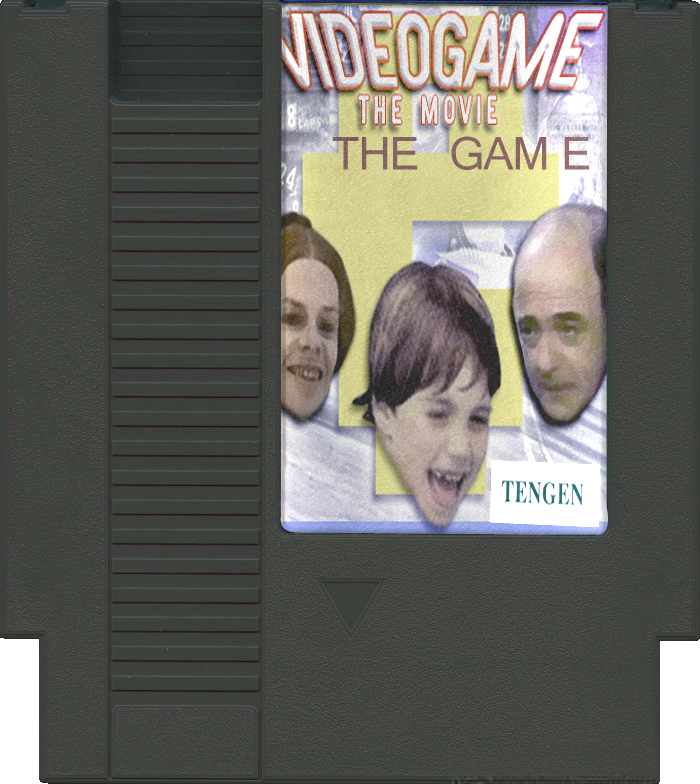 Videogame: The Movie: The Game NES cartridges began appearing in 1988. Most carts were the shape of officially licensed Nintendo games, but in a darker shade of gray. The second most common versions were dark brown, with rounded top edges. Further variations appeared identical to the shape and light blue color of carts made by maverick developer Color Dreams, leading some to place the origin of the game with them. But while Color Dreams found a way to reverse-engineer the NES to circumvent Nintendo’s NES10 lockout chip, every copy of VG:TM:TG uses the “voltage spike” circuit method. This fact also largely discredits the claim that versions of VG:TM:TG existed in a matte black cartridge with a security dongle attached.

The labels on all the existent games are the same, regardless of cartridge design: a poorly cropped portion of the film’s poster art, with “TENGEN” (a third-party developer formed from the ashes of Atari Games) added at the bottom. It is an obvious fake, although some believe the game to be Tengen’s reprisal against Nintendo for their various legal battles (initially concerning trade secret violations and patent infringement, followed by the infamous dispute over publishing rights for Tetris). But since these exchanges didn’t happen until after the game had already appeared, the motive for slapping the Tengen name on the label may never be properly explained.

Yet for all the differences in the packaging, they can’t compare to the bizarre game inside. Just as the film it’s supposedly based on had nothing to do with video games, the game has nothing to do with the movie. Rather, it embodies nothing but games itself–and quite literally.

VIDEOGAME: THE MOVIE: THE GAME borrows the mechanics and engines from more than a dozen of the most popular NES games ever made, including Mega Man, Gradius, Metal Gear, Castlevania, Adventure Island, Super Mario Bros., and Zelda II. In some levels, the graphics have been completely replaced with new sprites and backgrounds, and in others only the color palettes and level design have been remodeled (and sometimes in ways that appear completely arbitrary). Each level contains two stages, with a boss at the conclusion of the second. The admittedly difficult translations of non-linear games are pathetically short (the diving suit portion of Goonies II is used to create a very simple underwater maze, while the Metroid level consists of leisurely climbing up a tall vertical corridor and riding an elevator up and out of the screen). The Zelda II level is definitely the worst of the bunch, since Link must make it across the forest without entering the side-scrolling battle mode, which causes the game to crash.

Bootlegged NES games were certainly not uncommon, and neither were “multis” that featured sometimes more than a hundred pirated games on a single cartridge. The bulk of these illegal offerings came from Taiwan and China, with cheaply produced collage artwork and descriptions written in vernacular Chinese, oftentimes with slapdash English translations added (“Morio & Sonik 2”, “Draggon Ballz 2”, etc.). SuperVision, the best-known pirating company in Taiwan, would be an obvious suspect in the production of VG:TM:TG, if not for the absence of the SuperVision logo molded into the plastic of the cartridge itself. And unlike SuperVision and other Asian “X in 1” multi-carts, VG:TM:TG was an attempt to combine disparate segments into a new game. 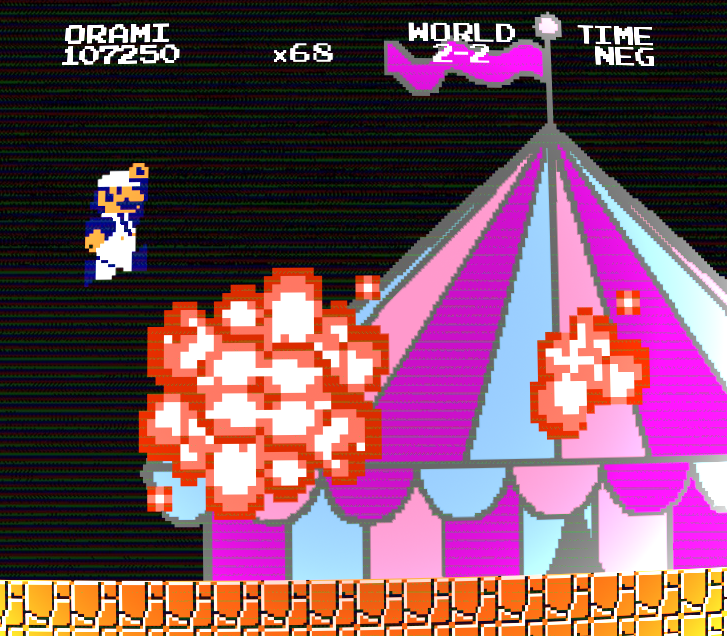 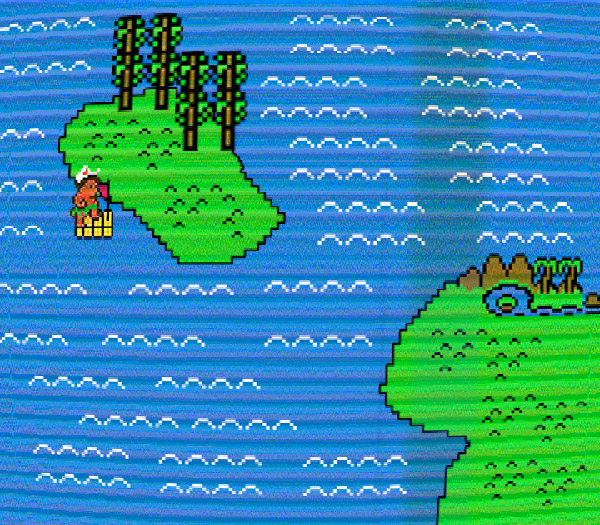 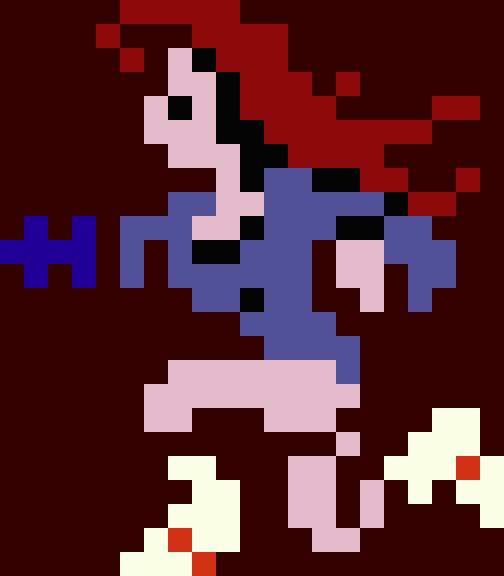 Furthermore, the text in VG:TM:TG is entirely accurate English. A level based on Gradius is titled “Clichédius vs. Cincinnadius” (a reference to disputed pronunciations of the original game title), puns that are unlikely to come from a non-English speaking country. The tone of the humor is dark, and sometimes offensive, as well. Super Mario Bros. is reworked into a skewed depiction of one of the worst fire disasters in U.S. history (at a circus in Hartford, Connecticut in 1944), and the likeness of Hiroo Onoda appears as a grenade-throwing boss in the Adventure Island segment, here called “Lubang Island”.

But the most remarkable detail of all was the game’s soundtrack. While the levels were obviously appropriated from various well-known sources, sound-alike music was created exclusively for the game, aping the style and feel of the originals. With the amount of blatant creative theft already evident, it is indeed strange that such effort would be expended in creating unique music.

Nonetheless, the music is just another intriguing element in a larger puzzle. Compared to other unlicensed creations of the time period, it is an impressive and ambitious achievement despite its flaws. Some of the titles cloned in VG:TM:TG were first officially released that same year, so an inside job still seems likely. Perhaps it was simply the work of a hobbyist, albeit one in an “insider” capacity. We may never know.

And finally, to those hoping to look through the end credits for clues: since the game is highly unstable when played on an actual Nintendo console, it wasn’t until a proper ROM dump was made that the game could be completed on an emulator. After the final boss is beaten, a single credit rolls up against a background of a star-lit sky: